Accumulates a Total of US$14 billion Through Foreign Contracts 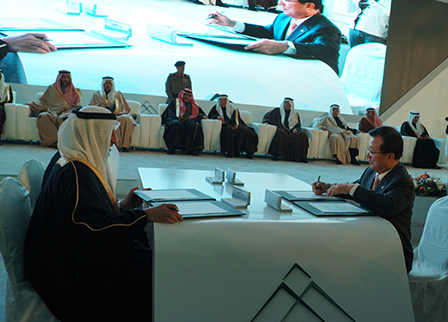 [17 February, 2014] Hanwha Engineering and Construction("E&C"), headed by President and CEO Lee Keun-Po, signed the contract, on February 5th, for the construction of a phosphoric acid production plant in Saudi Arabia. The contract, awarded by Ma’aden and others, is worth US$935 million.

Hanwha’s construction project involves building a phosphoric acid production plant in Umm Wu’al, the border region between northern Saudi Arabia, Jordan and Iraq. The contract was established in the form of an EPC (EngineeringㆍProcurementㆍConstruction)-LSTK (Lump-sum Turnkey), which includes all processes from designing, buying, to constructing.

The project is part of the next-generation business development plans promoted by Saudi King, Abdullah. It consists of constructing facilities for mining, ore dressing and acid production in Umm Wu’al and facilities for fertilizer production in Ras Al Khair that use raw materials produced in Umm Wu’al. Project expenses totaled approximately US$6.67 billion. The owners consist of Ma’aden, Saudi Arabia’s state-owned mining company, Mosaic, along with the world’s largest phosphoric fertilizer producer based in the USA as well as SABIC, Saudi Arabia’s public enterprise for petrol & chemicals manufacture. Top firms in the industry with the technology and industry know-how participated and signed contracts in the EPC format. The firms included Daelim Industrial from South Korea, Intecsa from Spain, HQCEC and SINOPEC from China, and SNC Lavalin from Canada.

“This contract is the result of Hanwha E&C’s successful completion of past projects in the Middle East region, as well as an accomplishment recognizing our know-how concerning this project,” said Lee Keun-Po, President & CEO of Hanwha E&C. “Hanwha E&C is planning to become a global construction company with a foreign sales ratio of 65% by the year 2015.”

Hanwha E&C’s overseas sales have increased steadily since 2007. In 2013, overseas sales accounted for 44% (US$1.68 billion) of total sales (US$3.73 billion). With the $935 million contract with Ma’aden, Hanwha reached a record total of US$14 billion for foreign contracts.

Hanwha E&C has quickly grown into a global player by leveraging its extensive experience in construction projects and by implementing its new technologies and long-term expertise across industrial, chemical, and power plants, civil engineering works, commercial buildings, and more. We have averaged an annual growth rate of 30 percent since 2002, and gained international recognition. We’ve been recognized as a top global contractor in Engineering News Record and our works are often referred to as the “bible of the construction industry.”