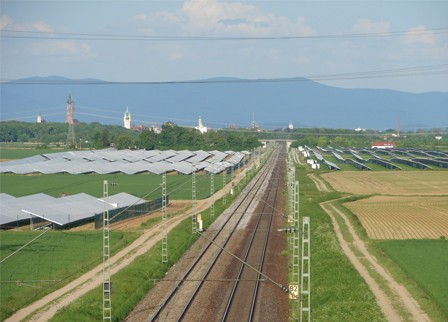 [Ismaning, 02 October, 2013] Hanwha SolarOne, a global provider of photovoltaic (PV) solar solutions and an affiliate of top-10 Korean business enterprise Hanwha Group, has supplied 8.2 MWp of solar modules to a PV park in Bavaria, implemented by GSW Gold SolarWind Management GmbH. The citizens of the city of Straubing and the citizens of the county of Straubing-Bogen have secured shares in the PV park through a local energy partnership. “GSW has successfully realized a true showcase project, both in terms of project planning and financing as well as with regard to local commitment”, said MaengYoon Kim, Managing Director of Hanwha SolarOne GmbH. “We congratulate the citizens of the city of Straubing and county of Straubing-Bogen on their sustainable investment.”

The energy initiative “GSW-Stadtwerke Straubing Bürgerenergie II GmbH & Co.KG” is based on a partnership between GSW, the local utility Stadtwerke Straubing, the city of Straubing and the municipality of Atting. More than 20 percent of the total investment has been covered by the citizens’ participation. In addition to the PV Park, the local energy project is complemented by a wind power park consisting of five 3.1 MW wind turbines erected in Bösel, Lower-Saxony. Through the Straubing Bürgerenergie II project, an estimated 47 million kWh of green electricity will be generated annually. “As was also the case for our first energy initiative in Straubing, local interest for the project was very high. The citizens’ shares were sold out within a few days”, said Josef Gold, General Manager of GSW Gold SolarWind Management GmbH. “With private citizens investing their savings, delivering the expected return is our highest priority. After thorough evaluation, we chose Hanwha Solar modules for our project in Straubing. We are confident these high-quality modules will deliver clean energy throughout the next decades.” The Lerchenhaid II PV park is distributed over three areas on both sides of the railway tracks close to Lerchenhaid, with ICE high speed trains rushing by. Following a seven-week construction phase, the park was connected to the grid of the local utiliy Stadtwerke Straubing at the end of April 2013. The park’s PV capacity totals 12.4 MWp, of which Hanwha SolarOne supplied 8.2 MWp. GSW will be responsible for operation and maintenance of the park. A smaller 2 MWp solar energy plant also citizen-funded in Bavarian Vatersdorf, was finalized in September 2013 by GSW with Hanwha SolarOne also supplying modules.