“Mark my words: a combination airplane and motorcar
is coming. You may smile, but it will come.”

Once the stuff of science fiction, eco-friendly flying vehicles have emerged as a promising solution to solving the mobility challenges of tomorrow.

Although they may seem like a far-off technology, these so-called urban air mobility vehicles (UAMs) could be coming to a city near you sooner than you think. That’s because much of the ecosystem necessary to support them – including everything from ultra-efficient batteries to autonomous driving systems and satellite communications technology – is already being developed. If this rate of development continues, experts predict that the first UAMs could take to the skies within the space of a few years, ultimately creating a $1.5 trillion market by the year 2040. 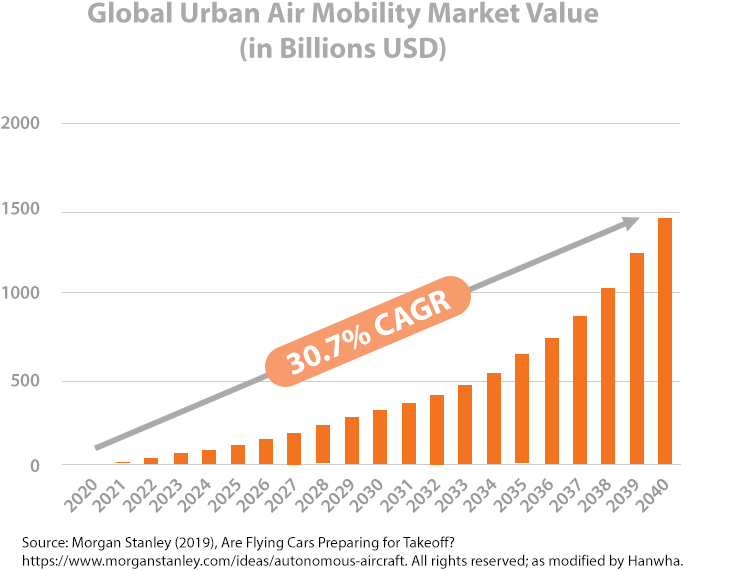 With that said, let’s take a closer look at how UAMs will transform commuting as we know it, and how Hanwha technologies are helping to make this possible.

The Challenge of Congestion

Before we discuss what makes UAMs such a promising alternative to ground transportation, we should first address some of the factors that have made urban mobility networks such an important focus of development.

Today, traffic congestion and pollution are among the most pressing issues facing major cities around the globe. Just how serious of a problem has air pollution become? According to a study from Nature Research, a majority of people continue to be exposed to levels of air pollution that are substantially above the World Health Organization’s air quality guidelines, making it “a major and increasing threat to public health.”

On top of that, inefficient mobility systems are costing commuters an ever-increasing amount of time and money. According to the most recent INRIX Global Traffic Scorecard, on average, Americans are losing 99 hours a year due to traffic congestion, which cost them nearly $88 billion in 2019, for an average of $1,377 per driver.

Unless we act fast, urban congestion and pollution will only get worse as cities grow more crowded. Experts predict that two-thirds of the world’s population will live in so-called megacities by the year 2050. That’s approximately 2.5 billion more people than live in urban areas today, which means more pollution and more strain on existing transportation networks.

UAMs are not exactly a new concept. In fact, they’ve long been viewed by policymakers, engineers and urban designers as an attractive solution to urban congestion.

Also referred to as flying cars or flying taxis, UAMs combine vertical takeoff and landing (VTOL) systems, electric propulsion, and advanced flight control capabilities to transport people and goods safely and speedily through the skies. Designs for UAMs can vary, but most are multi-rotored or multi-winged, take off and land vertically, and seat anywhere from two to six passengers.

Once they’re integrated into cities’ transportation networks, these quiet and environmentally friendly mobility solutions will greatly reduce urban noise and air pollution. Although some will be privately owned, the vast majority are expected to operate in a shared fashion, which will revolutionize ridesharing. The prospect of fleets of flying taxis transporting countless passengers across the cities of tomorrow becomes even more intriguing when you factor in the fact that UAMs could be capable of making up to four times as many trips as a regular car.

Given their obvious time-saving and environmental benefits, it’s easy to see how solutions like Hanwha and personal air vehicle (PAV) startup Overair’s Butterfly could be key to making urban mobility more seamless and sustainable.

The Buzz About the Butterfly

Although it’s still a concept at this stage, under its current specifications, the Butterfly will be capable of transporting four passengers and one pilot at airspeeds of up to 320 km/h, with a range exceeding 100 km.

The ability to safely travel at such high speeds will shrink cities by dramatically reducing the amount of time it takes to get from place to place. Just think how much simpler commuting would be if a trip across town that takes an hour by taxi could be reduced to just a few minutes.

The Butterfly’s game-changing speed is made possible in part thanks to aerospace development firm Karem Aircraft’s patented low-noise VTOL technology, which ensures a safe, quiet and efficient ride. These attributes, along with a powerful charging system and a long-lasting battery, will make the Butterfly ideal for deployment in the megacities of the future.

At the end of the day, the all-round efficiency of eVTOLs like the Butterfly – from both a technological and an economic standpoint – will be key to getting the urban air mobility market off the ground.

Because it’s capable of flying multiple trips on a single charge, with plenty of reserve power, and it features a relatively simple charging system, the Butterfly presents important cost advantages operations-wise. In some cases, given how expensive it can be to add new transportation capacity to a growing city, especially if it involves tunneling for subway expansion, those advantages could make UAMs like the Butterfly a more cost-effective option for reducing congestion. 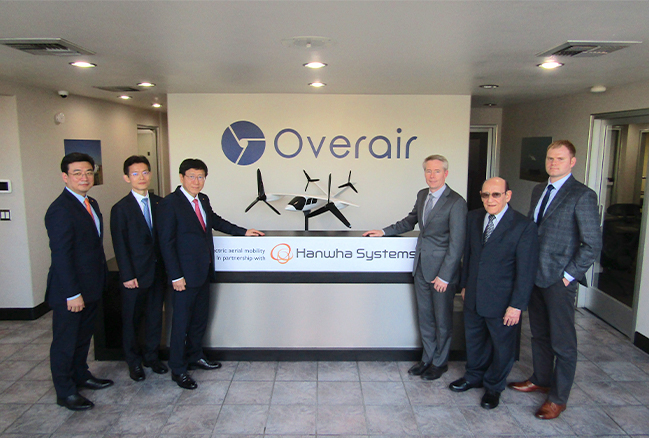 On Feb 14, 2020, Hanwha Systems announced that it will jointly develop UAMs at full scale with PAV startup Overair.

Of course, in order for UAMs to be considered as viable alternatives to more traditional forms of transportation, they must also feature safeguards that ensure a smooth and safe ride. The Butterfly has been designed to navigate various flight conditions, including unexpected gusts of wind, and is capable of safely flying and landing even if one of its four propellers were to malfunction.


Hanwha and Overair plan to commercialize the Butterfly by the middle of this decade, and have set their sights on fast-tracking UAMs’ eventual transition to pilotless flight. Adding autonomy to the equation will take flying vehicles’ safety to the next level by enabling them to operate free of the human factor that’s currently responsible for roughly 80% of helicopter accidents.

The Road to Autonomy

Making UAMs autonomous will require advancing the development of a wide range of technologies, including everything from sensors and batteries to the software systems that operate the vehicles and monitor air traffic.

Hanwha’s recent acquisition of Phasor Solutions, a leading developer of satellite antenna technology, could help accelerate this transition to autonomy. That’s because Phasor Solutions’ technology can be used to support autonomous vehicle telematics and add high-speed wireless internet services to UAMs and other vehicles. It works by utilizing low-Earth-orbit satellite communications technology, which, as the name implies, provides broadband connectivity from satellites hovering over the Earth.

The combination of advanced telematics and next-generation 5G networks will allow UAMs to support vehicle-to-vehicle (V2V) and vehicle-to-infrastructure (V2I) communications. These capabilities are important, as they’ll enable autonomous UAMs to process vast amounts of traffic and other data, which they’ll use to shuttle passengers safely to their destinations.

Before we can add fleets of UAMs to the cities of the future, we’ll need to install infrastructure that makes it easy for commuters to access them. Building locations for UAMs to take off, land, receive maintenance, recharge (or refuel), and park will change the landscapes of cities while making urban travel truly seamless.

To maximize convenience and satisfy high demand in mornings and evenings, UAM infrastructure networks will need to be larger than necessary in order to accommodate average use. This will require maximizing the number of flying vehicle ports, and integrating landing and take-off stations into residential buildings across each city.

Experts classify such infrastructure into three broad categories: vertihubs, vertiports and vertistations. Vertihubs could be thought of as standalone UAM airports located at the periphery of urban or suburban areas. Each city will have at least one, which will feature several take-off and landing pads, as well as additional spaces for parking and maintenance.

Vertiports are medium-sized structures that would ideally be located in the heart of a city – perhaps in a central business district, or adjacent to a busy train or subway station. They can be newly built or retrofitted into existing structures such as parking garages and rooftops. Due to space constraints, vertiports will have fewer take-off and landing areas than vertihubs, but more than vertistations, which will feature just one or two. The smallest element of this ‘vertiplaces’ network, vertistations are relatively low-cost facilities that can be retrofitted into helipads and other existing structures and used to connect rural or suburban areas to the rest of the network.

Building access points like these will be crucial for urban air mobility to truly take off. If these vertiplaces are not made widely accessible, UAMs could follow the same path as the helicopter, which has been hindered by a limited number of ports, which means fewer travel routes.

The Sky’s the Limit

When it comes to UAMs’ impact on cities, the old saying is true: the sky’s the limit. It’s exciting to imagine just how seamless city life will become when solutions like the Butterfly officially take flight.

Are you ready to step into the future of transportation?