Hanwha is committed to supporting sports activities around the world. We share the belief in the healthy lifestyle that sports brings to people and their communities, resonating in the pursuit of success. This is how Hanwha contributes to a more vibrant, sustainable future for our next generations. 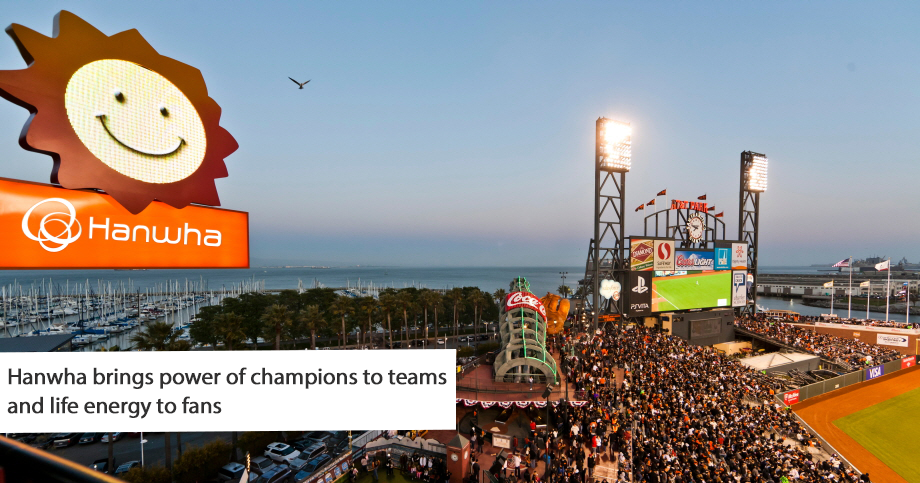 2014 nominees: Bumgarner, Posey and Pence, Madison Bumgarner, Buster Posey and Hunter Pence have come up big for the Giants in 2014, but only one will be voted 2014´s Mr. Energy.Major League Baseball trademarks and copyrights are used with permission of MLB Advanced Media, L.P. All rights reserved.

From 2012 to 2016, Hanwha, a global leading solar energy company, has been the official solar partner of the San Francisco Giants which is one of the most revered ball clubs in the Major League Baseball (MLB).

The San Francisco Giants won the World Series in 2014, and it is worth noting that the Giants had won the World Series the very year that Hanwha had become the official solar partner in 2012. The list of accolades does not stop there. The Giants are committed to promoting sustainability and clean energy for the local community. The club was recognized as the most environmentally conscious team by receiving the Green Glove, an award given to the team with excellence in environmental sustainability,
8 years in a row.

To energize and improve the lives of Giants fans and all Bay Area residents, Hanwha chose to make this partnership based on more than just baseball and kick started a series of green initiative campaigns titled, ‘I SUN SF’, which further contributed to the Giants’ legacy of environmental responsibility.

Since 2012, Hanwha, a global leading solar energy company, has been the official solar partner
of the San Francisco Giants which is one of the most prestigious baseball teams in Major League Baseball. It is also worth noting that the Giants won the World Series the very year that Hanwha had become the official solar partner in 2012, which comes on top of a win in 2010.