[December 12, 2017] On December 11th, Hanwha Group Chairman Seung Youn Kim began his trip to China by visiting the Hanwha Q CELLS factory in Qidong, located in Nantong City of Jiangsu Province. The Qidong plant is central to Hanwha Group's solar energy business in China. The purpose of his trip was to reaffirm the group's commitment to the employees and to their goal to produce the highest quality solar products in the world.

After touring the operations at the Qidong plant, Chairman Kim praised everyone for overcoming the challenges that the company faced soon after the acquisition. He commended the workers' perseverance, to which he attributed Hanwha's position today as a leading company in the global solar power industry.

"We will increase our global competitiveness while mass-producing the highest quality products using our in-house technology, right here in Qidong," said Chairman Kim.

He added, "We must continually manufacture the most competitive photovoltaic products in the industry. We need to source only quality parts produced not just in Korea but also in Malaysia, China and beyond." He went on to say, "There is a Chinese saying, The waves of the Yangtze River drive the next set of waves forward. Coincidently, the Qidong Factory is located at the Yangtze River, and like this famous verse, it can be our giant wave that pushes our solar business forward."

Hanwha Q CELLS (Qidong) Co., Ltd. was acquired by The Hanwha Group in August 2010, as part of Hanwha Q CELL’s strategy to foray into solar energy business. Since then the Qidong Plant has been instrumental in Hanwha's rise to become the world's leading solar energy company. The original production volume was 500MW for cells and 800MW for modules. Today, the Qidong plant, under Hanwha's leadership, produces a volume of 2.5GW for cells and 2.5GW for modules. In addition, after acquiring the German Q CELLS in 2012, Hanwha has actively infused advanced technology into the plant and dramatically improved the quality. The Qidong plant has reduced its module failure rate by 60% - the lowest in China. And by increasing its productivity, the company has successfully achieved a cost competitive advantage in its market.

Chairman Seung Youn Kim visited Hanwha Q CELLS (Qidong) Co., Ltd to praise the company for becoming one of China's top solar company for the first time since Hanwha had acquired it 8 years ago.

Last July, Chairman Kim had also visited the solar cell manufacturing facility in Jincheon where heavy investment continues to be made, and emphasized that such investment will "increase domestic employment and foster the growth of the solar industry."

Chairman Kim also urged executives and employees to "continue their efforts to build mutually beneficial relationships with other corporations and clients in China while working to fulfill Hanwha's corporate social responsibilities in China."

As part of President Moon's economic delegation to China, Chairman Kim also visited Beijing to attend the Korea-China Business Forum on the 13th and meet with other political financial figures in China. 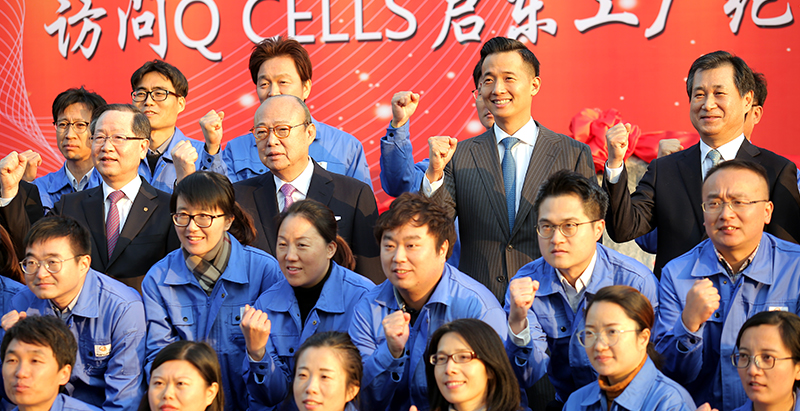 Chairman Seung Youn Kim (second from left in the second row from the back) with Hanwha Q CELLS Qidong factory executives.