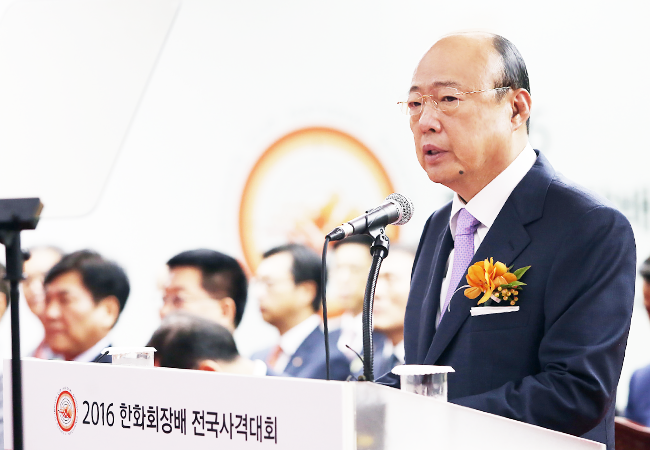 [July 05, 2016] On July 5th, the Hanwha Group Chairman Seung Youn Kim, the governor of Chungbuk, the mayor of Cheongju, the chairman of the Korea Shooting Federation (KSF), the CEO of Hanwha Galleria Hwang Yong-deuk, the vice-chairman of the KSF and other members of Korea's shooting community attended the 2016 Hanwha Chairman's Cup National Shooting Competition at the Cheongju Shooting Range in Chungbuk, Korea. The Hanwha Chairman's Cup National Shooting Competition is an important prelude to the Olympic Games and the final opportunity for Team Korea to prepare as it looks to repeat its shooting success back in the 2012 Olympics in London.

The Hanwha Group has served as the main sponsor of KSF since June 2002, providing over $10.8MM in funding and taking the lead to boost the interest in shooting sports in Korea.

Thanks in large part to these efforts, Team Korea took gold in shooting for the first time in 16 years at the 2008 Beijing Olympics with a win by Jin Jong-oh, followed by a record-setting 13 gold medals at the 2010 Guangzhou Asian Games. And in the 2012 London Olympics, Korea's shooting team posted its best Olympic performance ever by bringing home three gold medals.

Now in its ninth year, the Hanwha Chairman's Cup is one of Korea's five major shooting competitions and the first and only contest organized by a private-sector business. Established in 2008 by Chairman Kim, the Hanwha Champions Cup aims to build enthusiasm for professional shooting sports across Korea.

Special care was taken for this year's event to precisely duplicate the range facilities, indoor shooting match environment and scoring standards of the upcoming Rio Olympics to allow participants to better prepare for the games.

"Korea's shooting team has reached new heights following its best-ever performance at the 2012 London Olympic Games," said Chairman Kim. "We hope our athletes will challenge themselves to outperform and exceed expectations once again at the Rio Olympics."

KSF Vice-chairman Cho Jeong-hui said, "Hanwha Group's strong support not only allowed Korea to assemble one of the world's best shooting teams, but also was key to further cementing Korea's reputation as a global sports and athletic powerhouse."