[November 25, 2021] Recent history has seen some very significant developments in the global space sector. These include the ongoing privatization of outer space, the establishment of the ‘space economy’ and more countries committing to endeavors beyond the earth’s atmosphere.

South Korea’s space industry has also progressed in leaps and bounds in recent years. And this ascension continued in October when the nation launched its first fully indigenous rocket, Nuri (also known as KSLV-II).

Following this historic event, we explore some of the recent milestones reached by the Korean space industry. These include the launch of the nation’s Arirang satellites (KOMPSAT-1 and KOMPSAT-2) and the iconic Naro (KSLV-I) rocket launch. With Hanwha having been there to contribute to these developments and more, we also touch on the expertise and technology that the company has delivered to underpin the Korean sector’s rapid growth.

In parallel with the Korean accomplishments, we look at some of the global space sector’s most notable achievements across the decades. These include the development of technology that continues to impact our lives to this day, such as the first GPS, the Hubble Telescope and the International Space Station. We also touch on how private-sector pioneers have changed the very face of the space economy by making privatized space ventures increasingly feasible.

Check out the timeline below to learn more about some of the most instrumental moments in the history of both Korean and global endeavors in space. 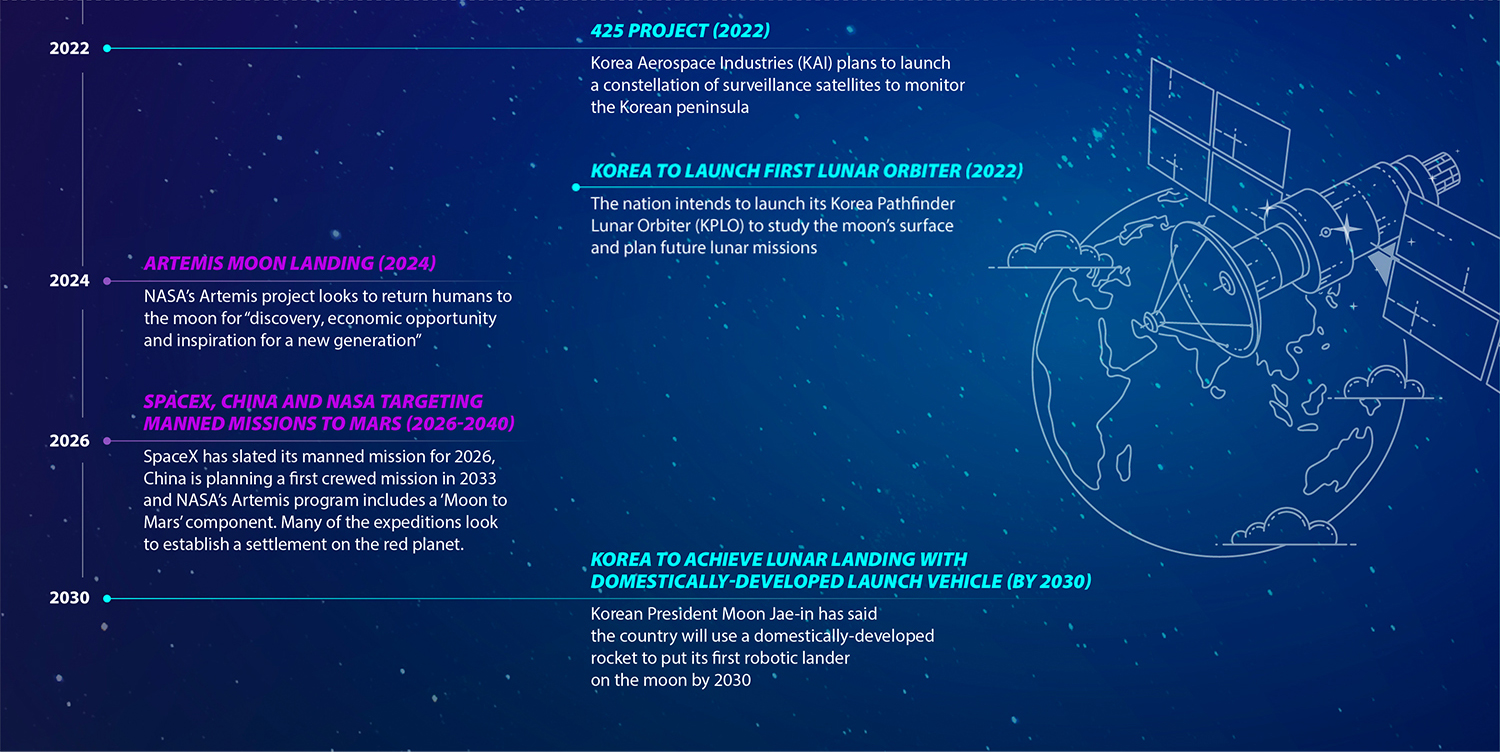 When exploring an industry such as the space sector, it would be wrong to look only to the past. After all, it is an industry that has always looked outward and to the future.

Globally, governments and the private sector have their eye on the future as they explore moons and planets, build rockets, maintain a presence at the International Space Station and even look to put humans on the moon and Mars. With global players extracting resources from Mars and studying the red planet’s suitability for human settlement, the prospects for the future are truly exciting.

Not one to be left behind, South Korea has its own ambitions for space. The nation is establishing its own network of monitoring satellites, launching a lunar orbiter and participating in a multinational moon landing effort.

In his opening remarks at the 2021 Seoul International Aerospace & Defense Exhibition (ADEX), South Korean President Moon Jae-in stated that, going forward, the Korean government will focus on securing core technologies and fostering the private space sector. To this end, the nation will dramatically increase global cooperation that is both trust-based and mutually beneficial. The launch of Nuri, Moon said, marks the beginning of Korea’s private sector-led space industry.

As the space race continues, Hanwha’s role in the momentous Nuri rocket launch has illustrated how the company is seeking to play an increasingly prominent role not only in space, but in people’s lives. You can find out more about the Nuri launch, and Hanwha’s role in it, here.

As our technology and expertise become increasingly refined, soon the only thing that will limit the advancements we make in outer space will be our imaginations.