Making History: Inside the Hanwha-made Engines and Pumps That Took the Nuri Rocket into Orbit

There’s no industry that captures the highs and lows of victory and defeat quite like the space industry.

After Korea’s Nuri space rocket (also known as KSLV-II) fell short of its goal to deliver a dummy satellite into orbit last October, Hanwha and the Korean aerospace community have finally made history. On June 21, the revamped and revitalized Nuri successfully completed its mission to orbit. Hanwha and a chorus of 300 Korean companies who contributed to the launch breathed a collective sigh of relief, proving that when we pool our talent, even the highest highs are within reach.

Making Nuri’s gravity-defying climb possible were a total of six powerful engines, built and designed by Hanwha. Four 75-ton liquid propellant rocket engines were there to power it through the initial stages of take-off, followed by another 75-ton engine for the second stage of launch and a smaller one for stage three.

The end result was a three-stage propulsion system designed to take the rocket from Earth and into orbit 600-800 km away. With each stage offering its own unique challenges, Hanwha had to think differently to find solutions. Tapping its technical expertise and fierce dedication to innovating space travel, it provided the advanced tools and solutions to keep Nuri powering safely forward at every stage of the journey.

Powering Each Stage of the Journey

The first mission the Nuri rocket accomplished was lifting a 300-ton body off the ground and powering it through the immense weight of Earth’s gravity. How did it do this? By channeling enormous amounts of pressure down the launch vehicle in a very short time. At the bottom of the space launch vehicle, four 75-ton engines provided by Hanwha Aerospace powered the rocket’s first big lift.

For engines to produce that much power at exactly the right time, the engines have to be supplied with large amounts of fuel at constant and high speed. The key to this lies hidden inside Nuri, with another Hanwha technology that ensures a steady supply of fuel to four powerful engines.

The Real Heart of the Nuri Rocket: Turbopump by Hanwha Aerospace

During a rocket launch, the launch vehicle sends fuel from the propellant tank to the engine combustor using one of two methods: pressurization or a turbopump. Pressurization sends fuel by directly pressurizing the oxidant tank and the fuel tank. But there’s a challenge with this method: as fuel and power demands increase, we inevitably need stronger and heavier tanks to bear that massive amount of pressure. Yet when it comes to launching rockets, just a few grams can change the whole game. That’s why Nuri used Hanwha Aerospace’s turbopump technology, which only requires a minimal amount of pressure delivered to the propellant tank, shaving off excess weight while delivering all the pressure needed for take-off. 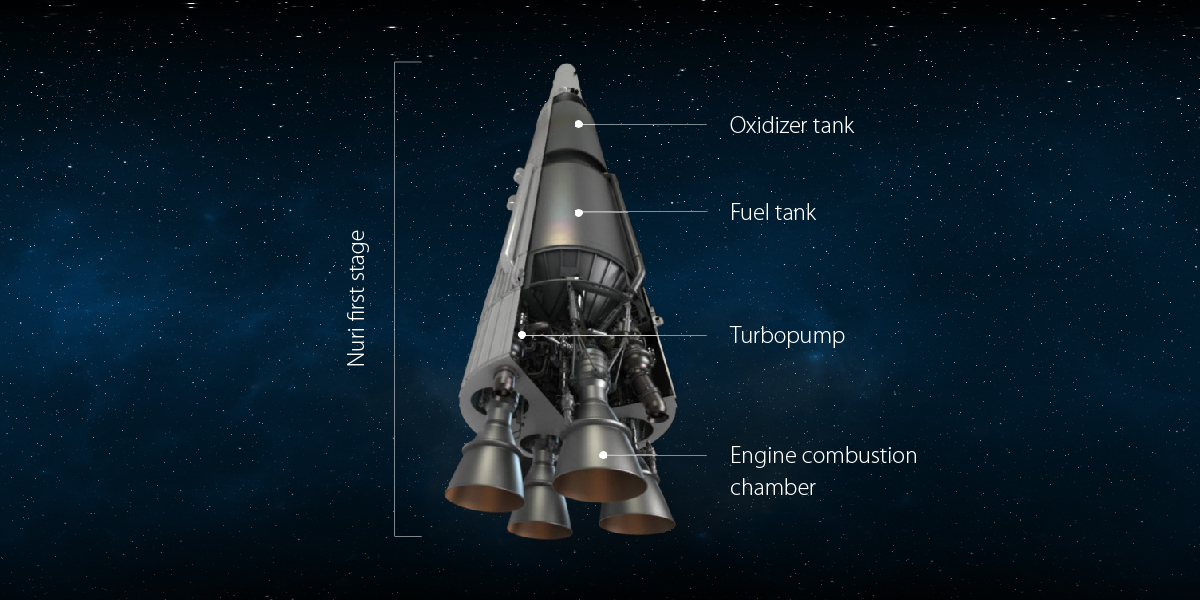 The first stage of the rocket is responsible for the hard work of lifting it off the ground.

Controlled combustion is the key to lift-off.

Controlled combustion drives the rocket
through each stage of launch.

The job of the turbopump is to take fuel (the power source of the launch vehicle) and an oxidizer (which burns the fuel) and deliver them to the engine at a level of pressure that remains constant. Known as the heart of the launch vehicle, it pumps fuel and oxidizer to the engine in the same way your heart supplies blood to every part of your body. During each second of lift-off, the 75-ton engine burns through 255 kg of fuel and oxidizer per second. That’s the equivalent of burning through a 200-liter drum of fuel in one second – an almost unfathomable amount.

Since the force created to leave Earth is so great, sophisticated and meticulous technologies were placed inside the launch vehicle to help the rocket take its first steps off Earth and into space.

Cryogenic: Bearing the Cold, to Produce the Heat

As they prepared for lift-off, the four 75-ton engines emitted hot combustion gas that reaches a scorching 3300 °C to 3500 °C (5972 °F to 6332 °F). To counteract these extreme temperatures and make sure Nuri was ready for the later stages of its journey, Nuri carried with it some extremely low-temperature materials, allowing it to produce the heat it needed by bearing the extreme cold. 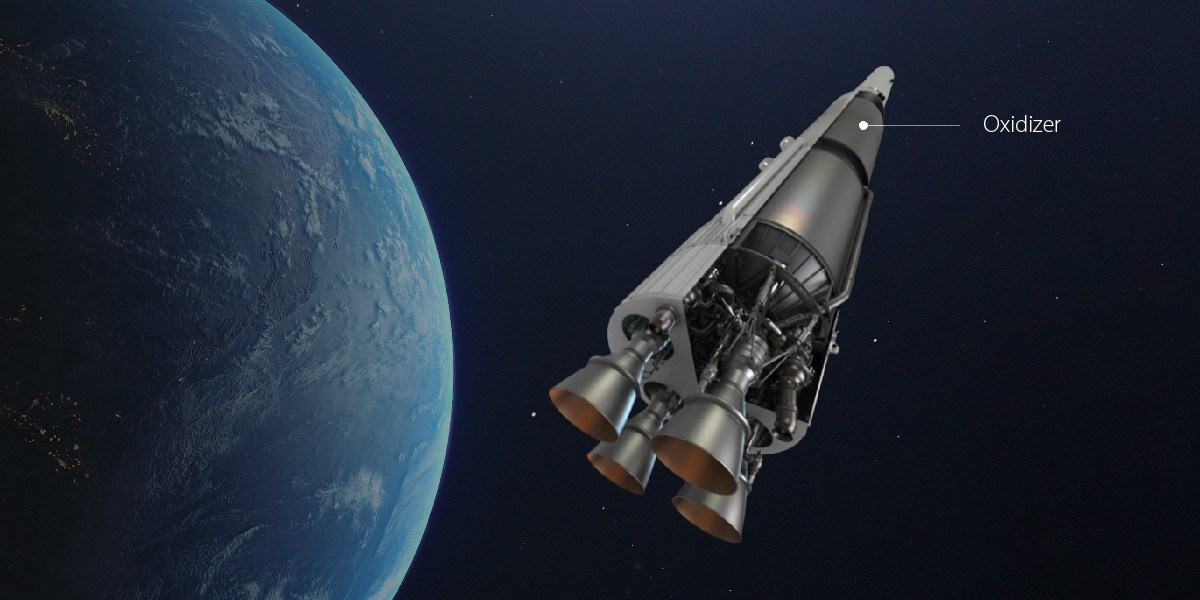 Engine Driving System: The Cryogenic Oxidizer by Hanwha Aerospace
Oxidizer inside the rocket.

Oxidizer inside the rocket.

The oxidizer inside Nuri was stored inside a tank that rests on top of the engine, where it remained in a cryogenic state until being pushed out to the combustor by the turbopump. Oxidizers are substances that mix oxygen and fuel to enable combustion and propel the launch vehicle upward. However, the further the rocket moves from the earth, the lower the amount of oxygen that’s available. Once it enters space, hardly any oxygen exists at all, so the rocket must carry all the oxygen it needs with it from Earth. But oxygen is too bulky to carry in its gaseous form, so it’s stored as liquid by placing the oxygen under pressure and storing it at extremely low temperatures. Oxygen changes from gas to liquid at a temperature of -183 °C (-297.4 °F), which is why it’s kept in a storage tank at cryogenic temperatures.

The oxidizer then maintains its cryogenic condition, not only within the oxidizer tank but also as it travels through the passageway, where it meets with the fuel before combusting. That’s why the oxidizer pump and other engine components (such as pipes, valves and other pumps) are built to operate under a cryogenic state, so they can properly control the movement of liquid oxygen to the engine. This was made possible by Hanwha Aerospace’s technology.

As such, Nuri was built to handle extreme temperatures at both ends of the thermometer – the scorching heat of lift-off, and the freezing conditions necessary to carry it through what came next.

Each of Nuri’s three stages of propulsion was tied to its own levels of altitude, and a different amount of energy was released at each stage to help it reach its orbital target. Stage 1 lasted from 0 km to 55 km and included the initial lift-off, while Stage 2 spanned from 59 km to 243 km, and Stage 3 stretched all the way from 248 km to 701 km, pushing Nuri into the final stage of its mission where it delivered its load. At each stage, Nuri intentionally shed parts, dropping off pieces of its engine after they served their purpose, until Nuri was left alone in space.

But even when combustion for one stage ends, the enormous power gained from that stage is not lost. And since the bottom of each rocket has a higher thrust than the top, special tools were needed to prevent collision and ensure a clean separation that returned each stage safely to Earth and continued the top on its journey up. 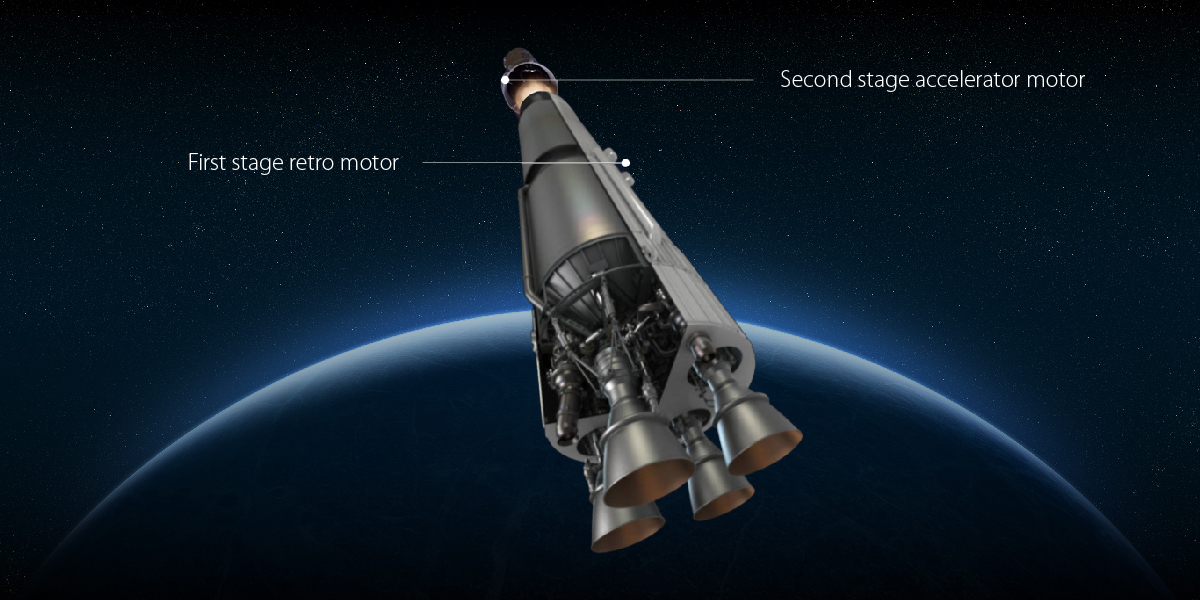 The accelerator and retro motor work together to ensure each stage separates cleanly.

The main players in achieving this were the ‘retro motor’ and ‘ullage motor,’ and Hanwha Corporation participated in the domestic development of both. The job of the retro motor is to block the movement of the lower part after separation, while the ullage motor adds propulsive force to the upper part of the rocket. The retro motor uses eight units when the first and second stages are separated, and two units when the second and third stages are separated. In the first stage of separation, the retro motor generates a monstrous 20-tons of thrust in about one second to push the first released stage away from the rocket in the opposite direction, while the ullage motor pushes the second stage in the direction of the flight. Even a slight error in timing can lead to a collision between stages or cause the engines to deviate from the orbit. Nuri had only a short flight window, and during that window it was crucial to ensure a clean and clear separation of stages, so that the upper and lower ends could both reach their goals.

Reaching the Highest Highs Together

With so much at stake in any mission to space, the margin of error is almost non-existent. Whether we’re delivering people or delivering satellites, it takes absolute precision and marvels of engineering to realize the dream of successful space flight. Hanwha and its partners put their deep knowledge of space travel and aerospace engineering to work to help Nuri break the atmosphere and complete its mission to orbit. With a successful rocket launch, it joins the international space community in proving that when fierce commitment meets technical expertise, incredible feats are possible.

*All images and videos of the Nuri rocket are owned and under copyright by the Korea Aerospace Research Institute (KARI).