[March 26, 2020] Throughout the 2010s, Hanwha underwent a corporate metamorphosis. With the Fourth Industrial Revolution underway, Hanwha was repositioning itself as a forward-looking company by investing in future growth engines such as solar energy, aircraft engine technology, and fintech. To manifest this symbolic transformation outwardly, Hanwha commissioned UNStudio, an acclaimed Dutch architectural firm, to revamp its global headquarters in Seoul, Korea.

The team from UNStudio, under the direction of Ben van Berkel, was tasked with redesigning Hanwha Building’s entire façade from the ground up. In addition to the visual makeover, they were also required to make the building’s design more environmentally sustainable. To fulfill both parts of their mandate, the UNStudio team created a “reactive façade” that is visually striking while taking advantage of the sun to reduce the building’s electricity usage. 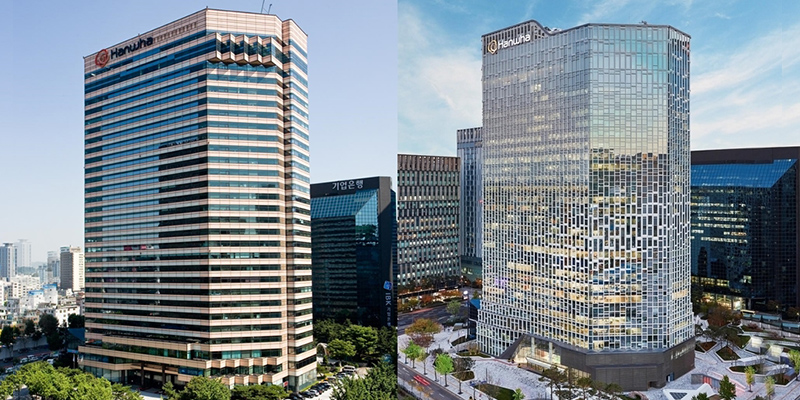 Hanwha Building was originally a standard 1980s Korean office block. Its renovation resulted in a much more distinct and dynamic look

Computer modeling showed UNStudio how much sunlight each section of Hanwha Building’s façade receives. The architects created the visual design based on this data

To create the reactive façade, UNStudio used parametric design, wherein form is determined by function. Using computer models, the firm determined which sections of Hanwha Building’s façade received the most and least sunlight. They then designed several different aluminum-and-glass window modules and used the data from the computer models to dictate how the modules would be tiled.

Areas that receive more sun have thicker, insulated windows to reduce the building’s heat load and cut down the use of air conditioning in the summer. The aluminum framing in these areas is also angled to provide shade to those working inside.

Areas that receive less sun, on the other hand, have flat aluminum framing to let in more natural light, reducing the need for artificial lighting. They also have thinner windows to let in more solar heat, which reduces the need for fossil-fuel-burning heating in the winter.

This resulted in Hanwha Building’s exterior gaining a more visually dynamic design that features undulating, asymmetric bands of large and small windows. Beyond their practical purpose, the flat aluminum framing on the sections that receive less sun act as “transition zones.” These break up the façade’s design and provide areas upon which observers’ eyes can settle when they take in Hanwha Building’s appearance.

Some of Hanwha Building’s windows shades incorporate solar modules to produce electricity while shielding the people inside from sunlight.

Solar modules integrated into the façade’s aluminum framing further reduce Hanwha Building’s energy consumption. Because the building lacks adequate roof space, modules were installed on window shades in areas that receive the most sunlight. In total, Hanwha Building has 275m² of Q.PEAK solar modules from Hanwha Q CELLS along its exterior. These can offset Hanwha Building’s traditional electricity usage by up to 800kWh/m² per year.

Hanwha Building’s new façade is a functional and visual symbol of Hanwha’s commitment to environmental sustainability. Around the world, Hanwha spearheads a diverse range of projects and campaigns, including those that increase access to energy by donating solar panels, combating pollution with solar power, and replant forests to offset global carbon emissions.

In every location and industry it operates, Hanwha is dedicated to solving environmental problems and ensuring a greener future for younger generations.