Hanwha Rides the Green Hydrogen Wave to a Sustainable Future

[October 30, 2020] The media is awash with news of the rising hydrogen economy and how hydrogen – the world’s most-common element – will transform the way people produce and consume energy.

From large-scale power plants to public transportation and personal vehicles, hydrogen has the potential to transition a large portion of the world’s fuel-burning infrastructure to a clean method of energy generation that emits little more than harmless water vapor.

Demand has been rising, with global output more than tripling over the past 30 years. Some forecasts expect the global hydrogen market to reach USD 191.8 billion by 2024.

However, this raises a question: Where will the necessary hydrogen come from?
For Hanwha, the answer lies in green hydrogen production.

“Green hydrogen” refers to hydrogen derived from low-carbon production methods. This is usually achieved through electrolysis, a combustion-free process where an electric current is run through water to split it into its constituent hydrogen and oxygen atoms.

This contrasts with “gray hydrogen” derived from industrial refining where fossil fuels like oil and coal are combusted and release greenhouse gases into the air.

Building on 30 years’ experience of developing and refining water-electrolysis technology, Hanwha Solutions’ Chemical Division is researching how to produce green hydrogen at large-scale and affordable prices. This work is being pursued in collaboration with the Korea Advanced Institute of Science and Technology (KAIST), Yonsei University, and Rensselaer Polytechnic Institute (RPI).

Currently, the Chemical Division is focused on developing commercial-hydrogen production via anion-exchange-membrane (AEM) electrolysis. With this method, an alkaline solution is subjected to an electric current that splits water molecules into hydrogen and oxygen. These are separated by a polymer membrane.

The advantage of AEM electrolysis lies in its use of electrodes made of either nickel or cobalt as catalysts. These metals are abundant and affordable, meaning hydrogen-production costs can be kept low. Additionally, neither nickel nor cobalt corrode in the alkaline solution used in AEM electrolysis, meaning relatively cheap electrodes only need to be replaced occasionally, making the process economical to scale up to commercial-production levels.

This contrasts with proton-exchange-membrane (PEM) electrolysis. While PEM electrolysis yields a relatively large amount of hydrogen, it uses an acidic solution and requires the use of electrodes made from expensive materials – such as titanium or platinum-group metals such as iridium or ruthenium – as catalysts, making the process highly cost prohibitive. Also, because these electrodes are exposed to an acidic environment, the electrodes corrode relatively quickly, requiring frequent replacement and adding to the overall cost.

High-temperature electrolysis is another possible method of hydrogen production. Like the name suggests, high-temperature electrolysis involves turning water into superheated steam before breaking the molecules down into hydrogen and oxygen. This is a very energy-efficient method, because it takes relatively less energy to generate heat than electricity. However, this form of electrolysis is still in early development and much more work is needed before its viability can be determined.

An ’electrolyzing’ development in hydrogen production

Through its research into scaling up and refining AEM electrolysis, the Chemical Division will set a new standard for green hydrogen production. Currently, 60 kWh of electricity is needed to produce one kilogram of hydrogen. The Chemical Division aims to bring that down by a significant margin and use 48 kWh of electricity to generate the same amount of hydrogen by 2023.

The key to achieving this goal will be the development and application of power-to-gas (P2G) systems that link renewable power plants – such as solar farms and wind turbines – to electrolyzers. Through this setup, surplus and off-peak electricity from these facilities – including solar-power plants operated by Hanwha Energy – will help offset the power needed to produce green hydrogen through electricity.

P2G refers to the use of surplus electricity from solar farms or wind turbines
to power electrolyzers that produce hydrogen. The generated hydrogen can be combined
with carbon dioxide to produce methane, which is easier to store. 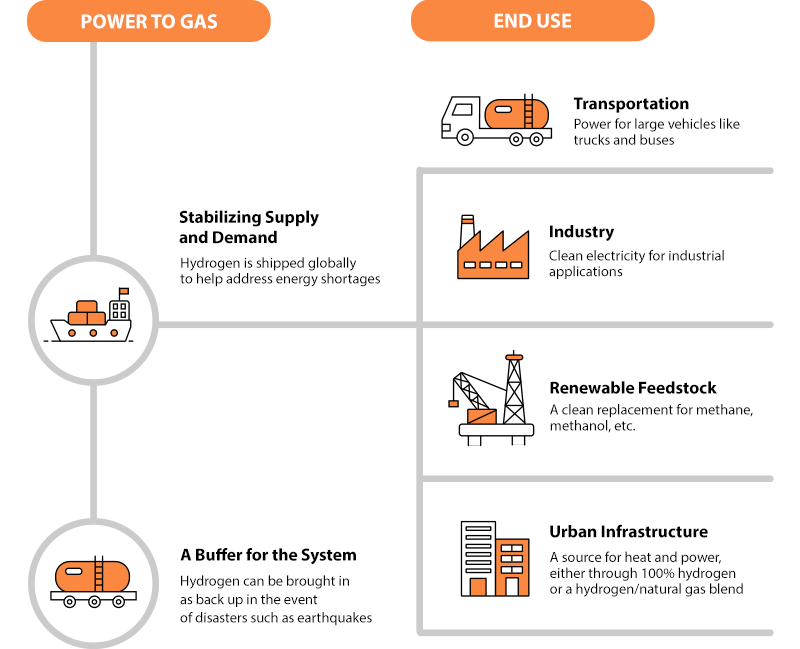 POWER TO GAS END USE

As the technology to produce hydrogen matures and becomes more efficient, Hanwha is determined to be at the forefront of the growing hydrogen economy. To fulfill this objective, multiple Hanwha businesses will come together to set up a global network of electrolzyers and P2G systems to provide the world with a fuel source that is sustainable to both produce and consume.