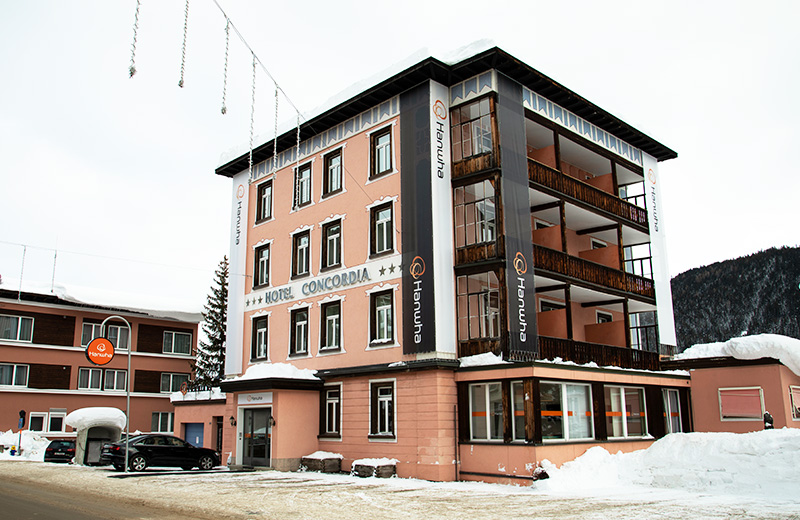 Hanwha booked the entire Hotel Concordia, near the Davos Congress Centre,
as its base of operations during the World Economic Forum Annual Meeting 2019

[January 31, 2019] Hanwha’s leadership participated in the World Economic Forum Annual Meeting 2019 (WEF) in Davos, Switzerland from January 22 through January 25, 2019. With the Fourth Industrial Revolution as the backdrop, participants at this year’s WEF discussed how tectonic shifts in business and technology will shape the future global economy.

This is the tenth year in a row that Hanwha has participated in the WEF since it first attended conference back in 2010. For Hanwha, the WEF is an opportunity to meet with business and political leaders from around the world and a chance to promote its capabilities as a global corporation with unlimited potential for growth and innovation.

As in previous years, Hanwha set up its base of operations at the Hotel Concordia, near the Davos Congress Centre.

In addition to promoting its position on major issues affecting the world today, Hanwha leveraged the WEF as an opportunity to promote the Korean culture. Visitors who came to the Hotel Concordia for meetings with Hanwha were presented with gift boxes wrapped in bojagi, traditional Korean cloth. They also dined on an array of Korea dishes prepared by chefs from THE PLAZA, Hanwha’s flagship hotel in Seoul, Korea.

To increase global awareness of its brand, Hanwha rented out a digital billboard prominently located on the road into Davos. Hanwha also placed an ad in the Financial Times on January 22 to publicize its commitment to environmental sustainability.

To address the negative impact of traditional power generating technologies on the environment, Hanwha Q CELLS CCO Dong Kwan Kim met with world leaders and advocated for the necessity of adopting and developing sustainable energy technologies, including photovoltaics.

During the meeting with King Philippe of Belgium, CCO Kim discussed the prospect of renewable energy in Europe and efforts needed to adequately address the pressing issue of climate change. CCO Kim and King Philippe also talked about Belgium’s plan to shut down its nuclear power stations by 2025 and achieve 20% of its power generation through renewable energy by 2030.

CCO Kim also sat down with Ana Trobovich, COO of Grid Singularity, a German tech company that is creating a decentralized data exchange platform built on blockchain technology. The two exchanged ideas on the type of technologies needed to anticipate future changes in the energy and electricity markets and how blockchain might play a role in them. They talked about the possible contributions Hanwha Q CELLS, as a leading renewable energy company, could make towards the future of power generation.

Hanwha Life Chief Digital Officer and Head of Global Business Dong Won Kim has always been passionate about digital innovation’s transformative effect on global business. He shared this interest through his talks on the new technologies of today and the world’s expanding digital capabilities of tomorrow with other business leaders from around the world.

One of CDO Kim’s first meetings at this year’s WEF was with Laurence D. Fink, CEO of BlackRock – one of the world’s largest asset management companies. During the meeting, the two exchanged thoughts on the future of the global economy and how governmental economic policies would affect asset management globally.

His next meeting was with Raj Ganguly, co-founder of B Capital, a venture capital group that invests in pioneering start-ups around the world. The two leaders discussed the South East Asian start-up landscape.

CDO Kim also met with Dr. Swan Gin Beh, Chairman of the Singapore Economic Development Board. Joined by CCO Dong Kwan Kim of Hanwha Q CELLS, they found that they shared a common goal to stimulate and sustain economic growth in Asia and around the world. They agreed that there were opportunities to invest in Singaporean companies that have the potential to create great innovations with the proper funding and mentorship.

With Hanwha seeking to expand its presence in the global aerospace industry, Hanwha Aerospace CEO Hyun-woo Shin’s time at WEF was dedicated towards identifying market trends and strengthening relations with leading aircraft manufacturers. In pursuit of this goal, CEO Shin attended a session with leadership representatives from Boeing, Airbus, and Lockheed Martin.

To gauge the strategies and the future of the global financial industry, Hanwha Asset Management CEO Yong-Hyun Kim held a series of meetings with global asset managers from major companies such as Bearing Asset Management and BlackRock. CEO Kim also attended a session where a panel of executives from the world’s leading financial service providers, such as the Blackstone Group and Zurich Insurance Group, discussed the role the financial industry will play in the new era of globalization.

Hanwha at Davos: Taking the stage as a leading player

For Hanwha Q CELLS CCO Dong Kwan Kim, this was his tenth consecutive year attending Davos. His first attendance was in 2010 with Hanwha Group Chairman Seung Youn Kim for Hanwha’s first participation in the World Economic Forum. From the beginning, CCO Kim has taken an active interest in promoting Hanwha and environmental sustainability at the WEF. He was instrumental in expanding Hanwha’s presence at the WEF and using the event to lay the groundwork to present Hanwha Q CELLS as a leader in the global solar energy industry.

It was at CCO Kim’s urging that Hanwha Q CELLS donated Q.PEAK 275 Wp solar modules to the Davos Congress Centre in December of 2013. It drew awareness among WEF participants to the importance of environmental sustainability and solar power’s potential to combat global warming.

In 2013, the WEF recognized CCO Kim’s work by naming him a member of the Forum of Young Global Leaders, an elite peer network of leaders and influencers under the age of 40 from the worlds of business, politics, and academia.

Hanwha Q CELLS CCO Kim has been a regular panelist for energy-related sessions at the WEF since 2014 when he shared Hanwha’s vision of renewable energy to world leaders. Since 2017, he’s hosted meetings at Davos with the Global Green Growth Institute and discussed global energy policies.

Hanwha Life CDO Dong Won Kim has also been a panelist. In 2016, having been recognized for his work in driving innovations in the financial services industry, CDO Kim was chosen as a panelist to be on the Young Leaders Roundtable at the Boao Forum for Asia, the Chinese equivalent to the WEF.

This year was Hanwha Life CDO Kim’s third time attending the WEF. He first came to Davos in 2017 and focused on the potential impact of FinTech on the financial services industry and its shifting landscape. During meetings with young entrepreneurs at Davos, CDO Kim spoke about future Asian growth engines and supporting Korean start-up expansions into overseas markets.