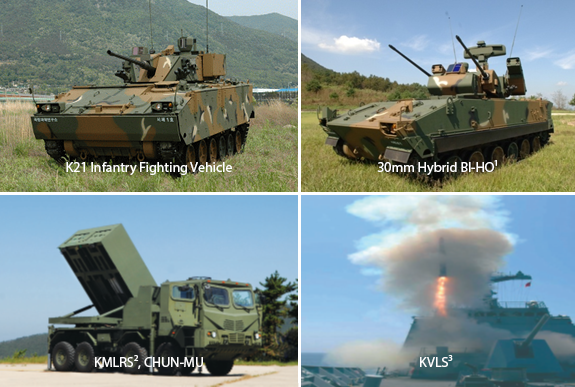 [May 31, 2016] Hanwha Group has finalized the acquisition of the shares of Doosan DST held by Doosan Corp. and other parties and relaunched the company as a Hanwha Group subsidiary. The deal takes Hanwha one more step beyond its leadership of the Korean defense industry towards establishing itself a top-tier global defense company.

Hanwha Group completed all regulatory processes including M&A approval by the Fair Trade Commission and renamed Doosan DST to Hanwha Defense Systems following shareholders and board of directors meetings on May 31. The new name reflects Hanwha Group's commitment to serving as the central pillar of Korean independent national defense and maintaining its stature as an industry leader, in alignment with the Group's core management philosophy of "contributing to the nation and society through business."

CEO Shin is an expert executive manager with a long history of working in the defense industry and extensive experience in business strategy, R&D and operational management, having served as the director of management strategy for Hanwha Corporation and the executive manager in charge of development projects. He was a major driving force behind Hanwha Techwin's first-quarter earnings surprise and is widely regarded to have put the company's business operation on a solid footing and put Hanwha Techwin on course for strong growth after his appointment in November 2015 as CEO of Hanwha Techwin's Aerospace & Defense Business Group.

With the acquisition of Hanwha Defense Systems, Hanwha Group has further cemented its position as Korea's top defense company with the total Group defense business sales in 2016 estimated at 3.6 billion USD. The synergy between the new company and Hanwha Techwin, Hanwha Corporation and Hanwha Systems is expected to provide the foundations for competing head-to-head with global defense industry leaders.

Shin Hyun-Woo, CEO of Hanwha Techwin's Aerospace & Defense Business Group and Hanwha Defense Systems, said, "The acquisition of Doosan DST is part of a long-term strategy for our growth into a global top-tier defense company," adding that "the company will draw from the strong synergy with Hanwha Defense Systems to bolster the competitive capabilities of every business division and actively develop overseas markets, as part of our efforts to grow into a world-leading defense company."