Hanwha Revs up Its Growth Engine
to Advance the Aerospace Technology

Space launch vehicles make it possible to launch satellites into orbit. In 2013, after the culmination of years of hard work, innovation, and the contribution of Hanwha’s advanced technology - the ‘Naro-1 (KSLV-I) - Korea’s first space launch vehicle, successfully launched a satellite into space. 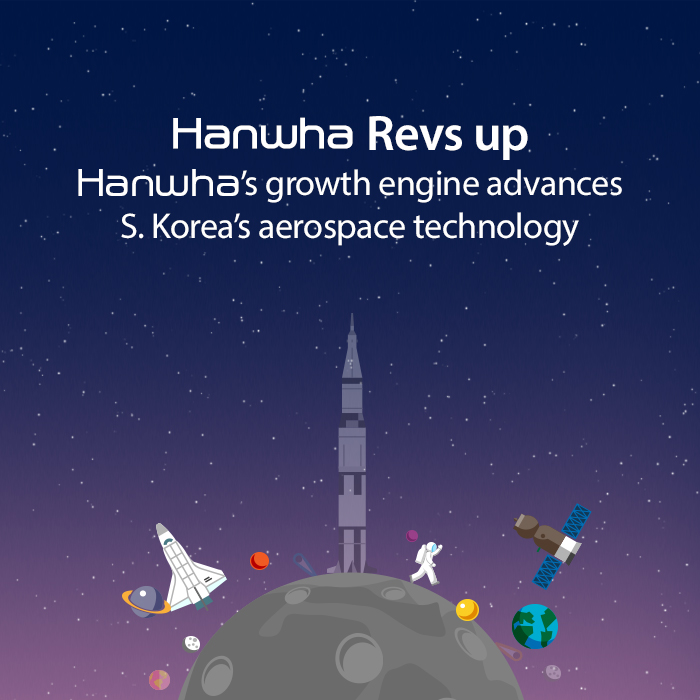 Hanwha is Behind the Success of Naro-1

On January 30th, 2013, the Naro-1 took to the skies, as the people of South Korea held their breaths, waiting for their dreams to come true. Despite the excitement, there was also anxiety because Naro-1 had failed twice before. The most recent disappointment occurred back in 2010, when the space launch vehicle failed to enter its target orbit and instead, exploded midair, leading many observers to be skeptical of success. However, after four more years, the 3rd launch proved to be successful, marking a huge technological breakthrough and an unforgettable dream come-true for the Korean people. 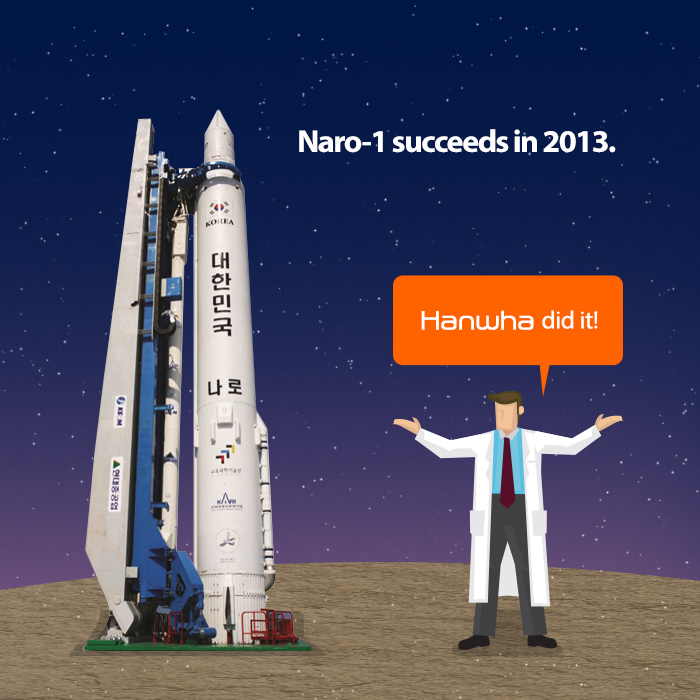 With the success of Naro-1, South Korea became only the eleventh country in the world to join the Space Club. The Space Club is an elite club of nations who have both built and successfully launched satellites into orbit. The Soviet Union (present day Russia) was the first member of the Space Club in 1957. Other countries followed including the United States, France, Japan, China, and Great Britain. In 2013, South Korea became an official member of this prestigious club.

Behind the scenes, Hanwha played a major role in the success of the Naro-1. Since 2003, Hanwha Corporation/Defense and Hanwha Corporation/Machinery have been engaged in the development and the manufacture of the Naro-1’s upper propulsion unit, consisting primarily of a kick motor and a thrust vector control system. The propulsion unit Hanwha crafted helped the Naro-1 reach its target orbit. 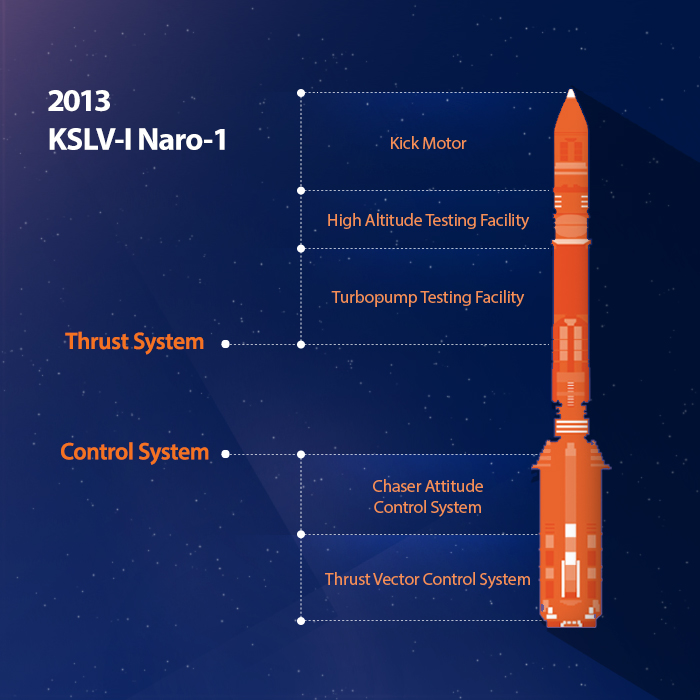 The patented kick motor was developed single-handedly by Hanwha. It was the first rocket engine made in South Korea that could position the satellite in orbit 300 kilometers above the Earth. The development team had to build the unit to operate with very high precision and their success was considered a great achievement.

The advanced thrust vector control system was another one of the core components of the space launch vehicle designed by Hanwha. This critical component enables a projectile to maneuver to a target while withstanding high stress that could be experienced at high altitudes or in a vacuum environment like that of space. Testing of these components as well as the turbopump components at high altitude were also ensured by Hanwha.

Now a recognized world space power, South Korea’s aerospace program has entered a new era. And Hanwha Aerospace is not only ready with business savvy and the technical know-how but it’s also making a statement about it, literally… 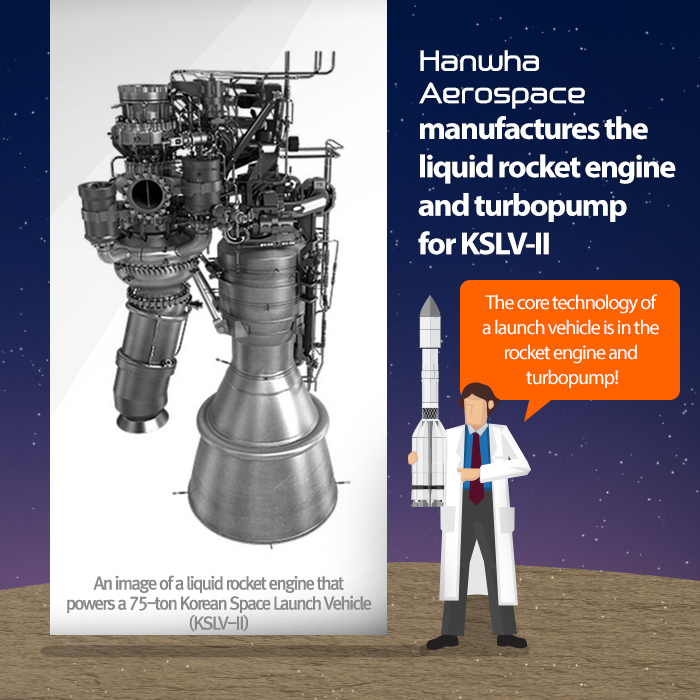 The liquid rocket engine must be built with a durability that can endure extreme conditions including high and low temperatures under high pressure. Due to its complicated structure and its difficulty to build, the engine is regarded as the holy grail of aerospace technologies. And only a few leading companies in the world have the ability to build such engines.

Hanwha Aerospace has been developing its own proprietary technology and has focused on the construction of the rockets for the Naro-1. The company has been building turbopumps and testing them from the beginning of the project. And over the years, Hanwha Aerospace has steadily improved its aerospace technology, demonstrating its progress consistently along the way. Now, after the success of Naro-1 and with the latest contract for the liquid rocket engine project, Hanwha can stand tall to join the ranks of other global tech leaders in rocket engine development. Hanwha believes the success of the Naro-1 will be the key for S. Korea’s next push into the Global 7 group of aerospace leaders. And as Hanwha continues to reach for the stars, its cutting-edge technology will not only be the driving force behind S. Korea's aerospace program but also for the global aerospace industry in the future. Hanwha will continue to meet the challenges head-on so that it can take the possibilities of today and make them the realities of tomorrow.