Shooting for the Moon: The KPLO Launch and Hanwha

The Moon, Earth’s closest celestial body, has captured the curiosity of humans and scientists alike for many years. Since the first humans stepped foot on the Moon in July of 1969 during NASA’s Apollo 11 moon landing, nations around the world have tried to reach the Moon.

How many times have we been to the Moon? While it differs for each nation — the U.S. has conducted a total of 30 missions while Japan has completed two and India just one — a total of six countries have been to or orbited the Moon since the space race began in the 1950s. During this time, the U.S. and the USSR competed to be the first nation to conquer outer space. However, after the U.S.’s successful Apollo 11 moon landing, public support for lunar missions diminished due to high costs, societal problems such as the Vietnam War and growing environmental concerns.

Fast forward to the present, more than 50 years after the Apollo 11 moon landing. There has been a resurgence of lunar missions around the world. Currently, seven missions from various countries are set to take place within the next year. Each nation has its own goals for space exploration, many of which go far beyond simply exploring the Moon. They include robotic missions to asteroids, exploration of Mars and its moons, and sending spacecraft to Jupiter. But before humanity can venture further into outer space, lunar missions are a crucial step to pave the way for missions to Mars and beyond.

South Korea, too, is contributing to this effort through its first lunar mission: The Korea Pathfinder Lunar Orbiter program. The Korea Pathfinder Lunar Orbiter, or KPLO for short, was launched at 8:08 a.m. on August 5, 2022 KST (7:08 p.m. August 4 EDT), with multiple ambitious goals. These include conducting a variety of scientific investigations, demonstrating space internet and more. If successful, the KPLO will make South Korea just the seventh nation to go to the Moon. Cited as one of Nature’s science events to watch for in 2022, the KPLO is another historic moment in South Korea’s aerospace history and Hanwha is proud to be part of it.

On top of the KPLO program, Hanwha has participated in a number of the nation’s aerospace accomplishments, from helping develop the propulsion system for the Arirang 1 to its role in developing the recently launched Nuri-ho rocket. Since South Korea’s space exploration beginnings, Hanwha has been there to aid along the way. The KPLO is South Korea’s next step towards the stars. Read on to learn about how the historic KPLO project was developed through a collaboration between NASA, the Korea Aerospace Research Institute (KARI), Hanwha and more.

Why Explore the Moon?

While the Moon exploration ventures thus far have resulted in various achievements, there are still a lot of mysteries to uncover. There are many unanswered questions about the Moon that still intrigue scientists, such as where did the Moon come from and was there ever life on the Moon, that could further our understanding of space. In 2008 during India’s Chandrayaan-1 lunar orbit, water particles were detected in the Moon’s atmosphere. Scientists were both thrilled and mystified by this discovery of water on the Moon, a discovery that could impact space missions for the future. Water is hidden in permanently shadowed craters at the Moon’s poles and, if harvested, could be used as breathable air, drinking water and rocket propellant, helping astronauts stay longer in space.

The origin and amount of water on the Moon isn’t the only mystery waiting to be unlocked. Samples from the Moon could also be analyzed to discover its material makeup. Terrestrial remnants could contain a record of the chemical composition of Earth’s mantle, and the presence of gases in the lunar soil could illuminate whether Earth’s atmosphere came into contact with the lunar surface, giving scientists a clearer picture of the Moon and Earth’s history. The Moon is also bombarded with solar winds that contain helium-3, an isotope that could safely be used for nuclear energy. The resources on the Moon could both aid our lives on Earth and further the study of space for the future.

In order to research and prepare for future space missions, creating hubs in space, such as the International Space Station, for astronauts to work and live on is crucial. A lunar base on the Moon could be used for future deep-space missions, including testing technologies and various resources, and is a goal for space programs around the world. This base could also be used as a launching pad for missions to Mars.

Thanks to technological advancements, exploring the Moon is more possible now than ever. Recently, an increasing number of private companies and organizations, including SpaceX and Hanwha, are entering the space exploration game. Lowered launch costs and enhanced competition have allowed government agencies to partner with private companies to develop more lunar and space missions.

These scientific questions and advancements in technology drove the planning behind KPLO’s missions and its voyage to space. The KPLO, with its unique technological capabilities, is South Korea’s first step in progressing towards these goals and helping advance lunar missions and space exploration. Korea’s Shot to the Moon

While outer space is filled with unknown variables and challenges for humans, the KPLO was built to take them on.

The KPLO is a 678 kg (1495 lb) cubic-shaped spacecraft containing two solar arrays, communications antennae and six payloads. Also known as “Danuri,” a combination of the Korean words dal (moon) and nuri (enjoy), the probe was launched on a SpaceX Falcon 9 rocket and aims to reach the Moon by December of this year. The length of time it will take Danuri to reach the Moon begs the question: how long does it take to get to the Moon? The shortest time is about three days, but this depends entirely on the trajectory taken. Danuri will use the ballistic lunar transfer trajectory (BLT), which will take longer but save energy in the process. Once it arrives at the Moon, the probe will orbit at an altitude of 100 km (about 62 miles) above the surface.

The design of the KPLO is the product of collaboration between KARI, Hanwha and others. The orbiter’s large body, measuring 2.29 m (nearly 7 ft 6 in) in length, was developed by KARI, and Hanwha Corporation provided the propulsion system inside. The KPLO also has a 30N class large-capacity high-thrust propulsion system needed to push it into lunar orbit. The KPLO’s single satellite propulsion unit, provided by Hanwha Corporation, was first utilized in the development of the Arirang 2 satellite in the 1990s and will also be used in next-generation low-orbit satellites.

KPLO’s liquid propulsion system, which allows the lunar probe to maintain a steady orbit and position and helps it land safely, was also developed through a collaboration between Hanwha Corporation and others. This technology was selected as one of Korea’s top 10 technologies in 2021 and is designed to help KPLO reach its target orbit safely and successfully.

The KPLO carries six unique scientific instruments to collect new data from the surface of the Moon. The KPLO has two indigenously built cameras: The Lunar Terrain Imager (LUTI) and a wide-angle polarimetric camera (PolCam). The parts for LUTI, which will take pictures of the Moon’s surface at a high-resolution of 2.5 meters per pixel, were supplied by Hanwha Systems, and the camera was developed through a collaboration of i3Systems, DACC-Aerospace Co., LTD and others. The PolCam has the potential to provide the first map of the Moon using polarized light, which has never been done for any planets or moons.

The KPLO is also equipped with a gamma-ray spectrometer (KGRS), which will analyze gamma rays released from the Moon, and a Magnetometer (KMAG), used to analyze magnetic “swirls” on the Moon to determine how it is protected from space radiation.

Perhaps most notably, Danuri is equipped with the ShadowCam, a camera provided by NASA that has been modified to be 200 times more sensitive than the original Lunar Reconnaissance Orbiter Camera (LROC) it is based on. The ShadowCam’s high resolution will help to map the shadow regions and locate water ice deposits and other resources. If successful, the South Korean KPLO mission will provide the first-ever high-resolution photographs of permanently dark areas of the Moon. These photographs could detect seasonal changes of the permanently shadowed regions (PSR) to measure the terrain inside craters, map albedo patterns of the PSR and interpret their nature, and more.

Finally, in an attempt to conduct interplanetary internet communication, KPLO is equipped with a Disruption Tolerant Network Experiment Payload (DTNPL). When testing the connection, KPLO plans to stream the BTS song “Dynamite,” an homage to the South Korean group making history both on Earth and soon in space. 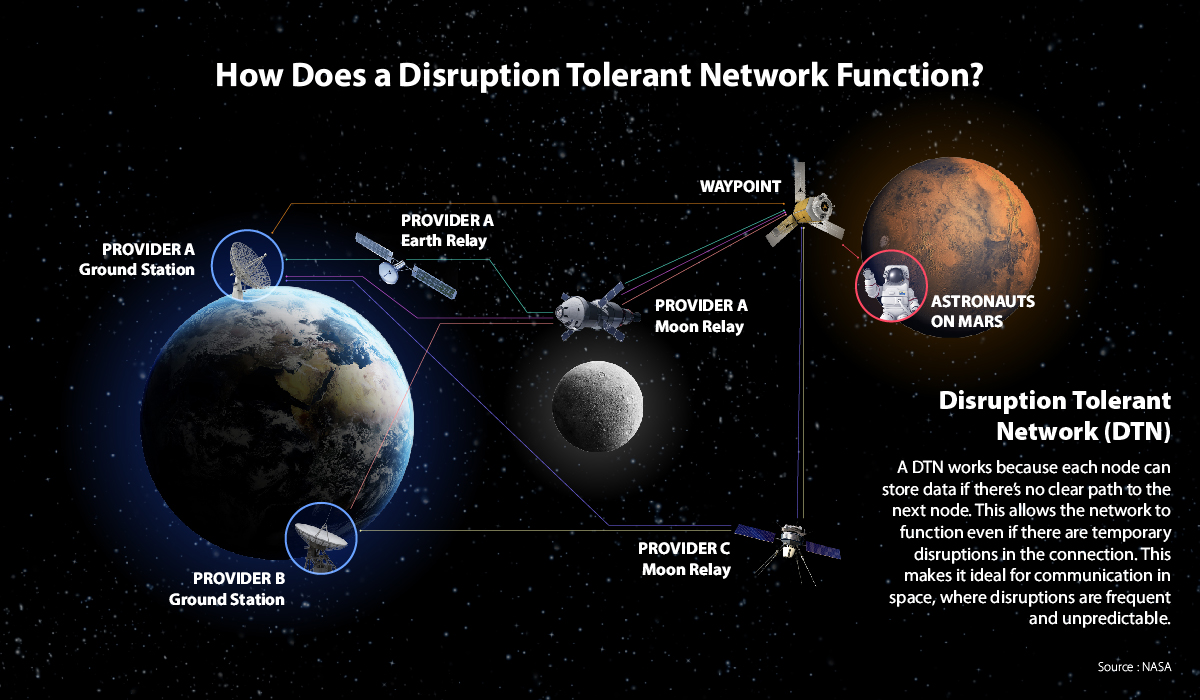 Launching Into Space and the Future

The KPLO joins many other lunar missions that are currently underway. Let’s take a look at how these missions fall within the greater scope of global space exploration and how Hanwha’s contributions will play a role in working towards these goals.

Along with the KPLO, a number of other nations have plans to send their own probes or landers to the Moon. These include Japan, which aims to send a probe to reach the lunar surface to find water ice, and Russia, which is working to send its first probe since 1976 to land on the Southern lunar pole. South Korea’s KPLO mission falls in step with these goals and will help to provide data and information that can be used for these and future space missions.

KPLO is South Korea’s first step in its lunar exploration plan. The second step will be to land on the Moon by 2031 and conduct lunar surface investigations using rovers and landers. In line with this plan, Hanwha is gearing up to work with KARI on the development of a next-generation space launch vehicle capable of thrusting sufficient payloads to put a lunar lander on the surface of the Moon. Hanwha will also conduct R&D in collaboration with leading Korean research institutes to incorporate an In Situ Resource Utilization (ISRU) mission in the moon lander.

Since the success of Nuri-ho, South Korea also has plans to improve Nuri’s technical capabilities and stability by making an additional four launches by 2027. In collaboration with KARI, Hanwha will work to develop these four additional rockets, furthering South Korea’s aerospace progress.

Perhaps the biggest missions ahead are the NASA Artemis missions that aim to send the first woman and person of color to the Moon. After conducting a variety of lunar missions, this program ultimately aims to send astronauts to Mars. South Korea joined other nations in signing the Artemis Accords in May 2021, showing its commitment to pursuing further space exploration and establishing a presence on the Moon. In support of these goals, Hanwha is developing ISRU technologies to utilize resources in space, such as on the Moon and Mars, to help space programs sustain longer missions and be less reliant on resources from Earth. Through this agreement, Hanwha will help South Korea become a leading global player in space exploration and further progress for all. The Final Frontier Within Reach

Despite the challenges that we have endured in the past, lunar exploration and, more broadly, space exploration seem within our reach now more than ever. We are entering the “New Space Age,” an era where limits are challenged and history is written. With the cooperation of nations and companies around the world, we can further our understanding of space and explore the galaxy beyond our wildest imaginations. Hanwha remains committed to partnering with companies and organizations to continue developing technology for space exploration, aiming to reach the stars someday.