How Green Hydrogen Will Fuel the Future of UAM – Hanwha

The future of urban transport is in the air, and deciding how we power travel will shape the way we commute, work, and live.

Urban Air Mobility (UAM) is still an emerging industry, but it has the potential to revolutionize transportation by making intercity travel not only quick and affordable, but also sustainable. Around the world, companies are racing to fast-track the development of electric vertical takeoff and landing (eVTOL) aircraft. However, moving the commute from the ground to the sky doesn't come without its challenges. One of the biggest things keeping UAM from truly taking off is the limitation of lithium battery technology, which most eVTOL manufacturers currently use. As a leading global total energy solutions company, Hanwha has been applying its expertise in clean energy technologies to explore how powering aircraft with hydrogen fuel cells could make urban air mobility even more efficient and sustainable.

In January of this year, Hanwha Aerospace officially announced its plans to develop hydrogen fuel cells for use in aviation and create a new ecosystem for the UAM market. The announcement came on the heels of the company's successful pitch to the Korea Institute of Energy Technology Evaluation and Planning (KETEP) and its "Fuel Cell Lightweight Technology Development for Aviation Mobility" project.

UAM is an exciting next step in urban transportation, and Hanwha is making strategic investments to usher in a new era of electric flight.

UAM has gained attention from both companies and consumers for its enormous potential to disrupt mobility services, speed up travel, decrease aircraft emissions, as well as to reduce strain on existing public transportation. The global UAM market is expected to grow from $2.6 billion in 2020 to $9.1 billion in 2030, spurred in large part by UAM's promise to solve the problems of traffic congestion and air pollution.

The benefits for commuters couldn't be clearer. Even before the concept of UAM became mainstream, we could already see its potential impact on daily transit. For example, a select few in São Paulo can currently pay $500 to $1,500 to turn a four-hour ground commute into a 10-minute helicopter ride. Advancements in new technology promise to extend such benefits to more people in cities across the world. 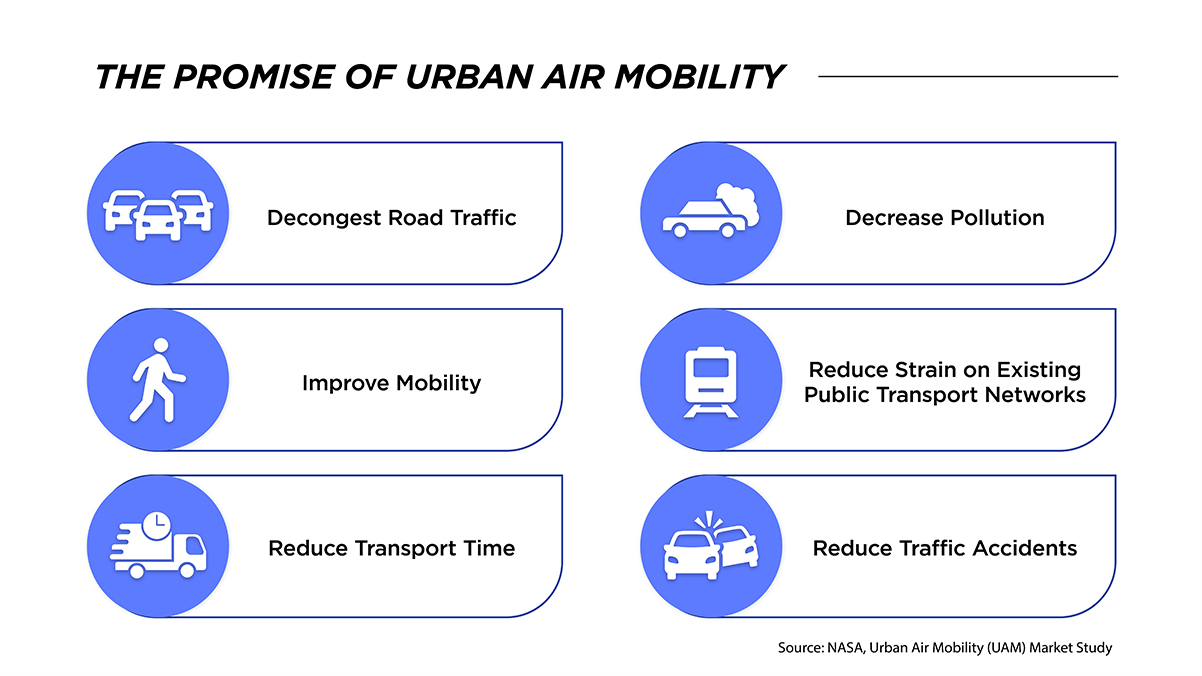 With so many opportunities for innovation, global companies like Hanwha have been entering the UAM market to lead the charge to revolutionize transportation. Specifically, Hanwha Systems is partnering with Overair, an American eVTOL developer, to build the electric propulsion system for an emissions-free air taxi called the "Butterfly." At the beginning of this year, Overair announced the successful launch of the Butterfly's full-scale propulsion system test program, a milestone in both companies’ efforts to conduct the vehicle's maiden flight by 2023. This important step, combined with Hanwha Aerospace's recent announcement that it would be developing hydrogen fuel cells for aviation, makes this an exciting time for the UAM industry. Believing that an emerging industry with so much potential must be powered in a way that is above all sustainable, Hanwha is committed to advancing hydrogen as the fuel of the future.

What makes hydrogen a true fuel of the future? For starters, it's the most abundant element in the universe. It's renewable, readily available and its fuel cells are already being used in everything from passenger cars and buses to spacecraft. In fact, the hydrogen fuel cell vehicle market is expected to reach $42.03 billion globally by 2026 at 66.9% CAGR.

A hydrogen fuel cell works by fusing hydrogen with oxygen in a process that resembles a battery, creating electricity to power a motor. The only byproducts are water and heat, making it a zero-emissions mode of transportation. This means that, as long as the energy used to produce it is sustainable, hydrogen can be a truly green fuel.

Unfortunately, most of the hydrogen fuel supply today comes from processes involving natural gas or other fossil fuels. To combat this issue, Hanwha has been advancing a cleaner production method, known as electrolysis, which uses an electric current to split water molecules into hydrogen and oxygen – a process that still requires energy. If that electricity comes from a renewable energy source such as wind or solar power, the resulting “green” hydrogen is a renewable, zero-emission fuel.

Is the hype around hydrogen justified? While some obstacles still need to be overcome, technological advances by companies like Hanwha are making hydrogen production more efficient and sustainable. These improvements, combined with global goals to decarbonize, are helping to drive a new hydrogen economy. So why use hydrogen fuel cells for UAM? Because building a battery that’s capable of meeting UAMs’ demanding needs poses a significant challenge. Specifically, UAMs need an energy system that balances weight, power, and energy capacity.

The key to realizing a future of urban air mobility is developing a reliable power source. The battery must be compact enough without taking up too much room or adding too much weight, yet strong enough to power vertical takeoffs, landings, and sustained flight.

Because they have an energy-to-weight ratio ten times greater than lithium-ion batteries, hydrogen fuel cells could take UAM technology to new heights, fast-tracking our progression to a high-flying and efficient future.

While battery technology has advanced significantly in recent years, current lithium standards are still limited when it comes to packing enough power for long-distance flights. On the other hand, hydrogen fuel cells have a high energy density, which can significantly increase the operating time and distance of UAM compared to batteries. And, unlike batteries that need to be recharged, fuel cells have a longer life, faster recharge time and the ability to generate electricity as long as a fuel source - hydrogen - is provided.

Because there are no moving parts, fuel cells are also silent and highly reliable, which is preferable considering the noise pollution of other flying vehicles. City dwellers can sleep easily knowing that the sound of air taxis won’t keep them up late at night. 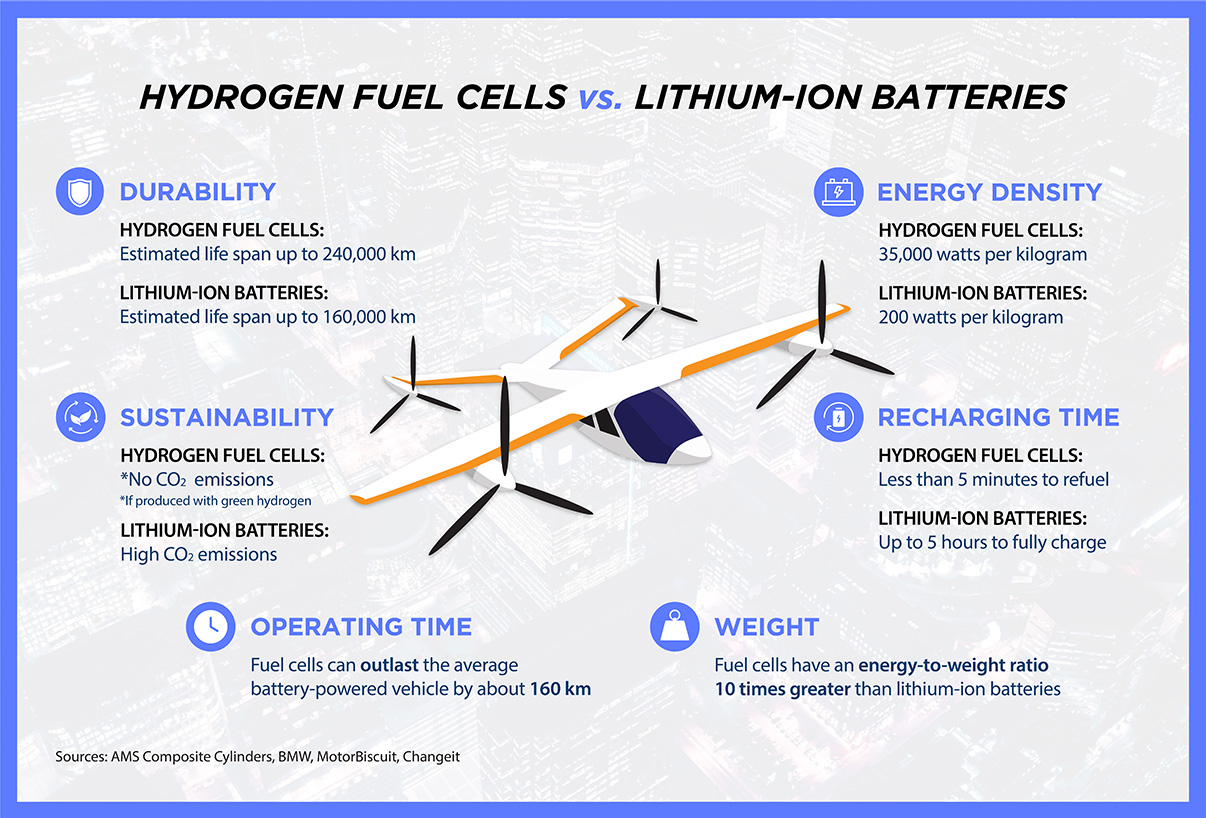 Innovating for a
Green Energy Future

While to some, UAMs may still seem like a far-off technology, mass adoption may come sooner than expected, thanks to Hanwha and other companies’ heavy investment into research and development. Considering the KETEP’s selection of Hanwha Aerospace to lead the development of a hydrogen fuel cell system for use in urban air mobility, the aviation industry has a game-changing opportunity to reduce emissions and introduce alternatives that address sustainability issues.

By 2025, Hanwha Aerospace plans to develop core technologies for hydrogen fuel cells for aviation, focusing on areas like improving fuel cell performance and reducing system weight. Hanwha Aerospace will draw on its years of expertise developing the Korean launch vehicle Nuri (KSLV-II) as well as various engine parts for civil aircraft. Combining technology prowess with a commitment to sustainability, Hanwha is laying the groundwork for a green, zero-emissions transport solution for all.

A New Era of
Electric Flight

UAM has the potential to transform transit completely in a sustainable way – but there are numerous technical and infrastructure challenges still to overcome. Hanwha is setting its sights high by taking on two of those biggest challenges – improving fuel cell performance and reducing system weight – to build this sustainable vision for the future. Investing in hydrogen fuel cells technology will play a key role in overcoming these obstacles and bringing people closer to experiencing the benefits of eco-friendly aircraft. As urban transport heads into the sky, Hanwha will be piloting us all towards a green mobility solution that brings convenience, affordability and enjoyment to flights for everyone.